Your basket is now empty.

Oliver Coates is a cellist, composer and producer based in London. He has performed solo shows in China, Russia, Brazil, Egypt and Australia, and made his New York debut at Le Poisson Rouge. He was the winner of the Royal Philharmonic Society Young Artist Award 2011 and is an Artist in Residence at the Southbank Centre. Two major commissions premiered in 2017: HELIOTONES, for girls' choir, flutes, cello and electronics, for Borealis Festival, and Shorelines, for string quartet and electronics, for Cryptic at Operadagen Rotterdam.

In 2016 Coates released a solo record, Upstepping, on PRAH, and a collaborative record, Remain Calm, with Mica Levi on Slip. He works closely with Levi, London Contemporary Orchestra, Elysia Crampton, Jonny Greenwood and the visual artist Lawrence Lek, for whom he has scored the award-winning video pieces Unreal Estate and QE3. He has conceived and programmed the Southbank Centre’s long-running Harmonic Series and its first DEEP∞MINIMALISM festival in 2016, which featured Pauline Oliveros’ last public Tuning Meditation.

Laurie Spiegel (born September 20, 1945 in Chicago) is an American composer. She has worked at Bell Laboratories, in computer graphics, and is known primarily for her electronic-music compositions and her algorithmic composition software Music Mouse. She also plays the guitar and lute.

Spiegel was seen by some as a pioneer of the New York new-music scene. She withdrew from this scene in the early 1980s, believing that its focus had shifted from artistic process to product. While she continues to support herself through software development, Spiegel aims to use technology in music as a means of furthering her art rather than as an end in itself. In her words, “I automate whatever can be automated to be freer to focus on those aspects of music that can’t be automated. The challenge is to figure out which is which.”

Spiegel’s realization of Johannes Kepler’s “Harmonices Mundi” was chosen for the opening track on the “Sounds of Earth” section of the golden record placed on board the Voyager spacecraft in 1977. Her piece called Sediment was used in the cornucopia scene of the 2012 movie The Hunger Games.

Neil Luck is a composer, performer, and director based in London. His work often explores the pathos and interaction between live human performance and multimedia, and attempts to frame the act of music making as something curious, or weird, or useful, or spectacular in and of itself. His work takes a range of forms from music-theatre, to concert works, radio, public projects and recordings.

Neil is the founder and director of the music-theatre ensemble ARCO, and a co-founder of artist cooperative squib-box. Independently, he has also worked with and written for a people and ensembles in the UK and abroad, and presented work at music venues, festivals, and galleries internationally including the ICA, Whitechapel Gallery, MATA Festival (NYC), Tate Britain, Tate Modern, BBC Proms, Palais de Tokyo (Paris), in Vilnius and Aarhus Capital of Culture festivals, and the Tokyo Experimental Festival.

Born in 2000, Alexia Sloane is a synaesthetic British composer. Between 2016 and 2018, she was a First Study Composer at the Royal College of Music Junior Department and a Second Study Flute, one of 6 composers with the National Youth Orchestra of Great Britain as well as one of 4 composers with the Britten Sinfonia Academy. She was an Aldeburgh Young Musician in 2015-2016 and a member of the National Youth Recorder Orchestra. In 2017, she was declared the overall winner of the Royal College of Music Junior Department Composition Prize as well as one of the seven winners of the Royal Philharmonic Prize and Classic FM 25th Birthday commission. She was highly commended in the BBC Proms Inspire Competition with her piece Longing for Equinox, written for the St Catharine’s Girls’ Choir (Cambridge). In 2015, she was the first female composer to win The Cambridge Young Composer of the Year Competition. Her commissioned piece, Vigil For Gaia, as a result of winning the competition, was performed by the Phaedra Ensemble at West Road Concert Hall in Cambridge in October 2017 as part of the Cambridge Festival of Ideas. Her commissioned piece by the Royal Philharmonic Society and Classic FM, Elegy for Aylan, was premiered in October 2017 at St George’s Hall in Liverpool by members of the Royal Liverpool Philharmonic Orchestra, conducted by Clarke Rundell and broadcast on Classic FM. The themes of Alexia’s compositions are nature, philosophy and psychology. She also enjoys exploring the setting of texts from a wide range of cultures and languages. Her method of composing is very strongly imagining the pitches she wishes to be played or sung both melodically and harmonically away from any instrument. She writes the pitches down in Braille music and then dictates them to an amanuensis. The use and effect of silence in music fascinate her, perhaps as a result of her love of Buddhism. Alexia’s pieces have been performed in the following venues: West Road Concert Hall in Cambridge (by The Hermes Experiment, Britten Sinfonia, The Ligeti Quartet, Dr Sextet and The Phaedra Ensemble) as well as at Great St Mary’s University Church, Cambridge, Jesus College Chapel, Emmanuel College, St Catharine’s College Chapel, King’s College Chapel, the Guildhall, the Fitzwilliam Museum, the Tate Modern, the Southbank Centre, Handel House, Snape Maltings, The Royal College of Music, St George’s Hall (Liverpool) and further afield, in Melbourne, Australia. (wikipedia) 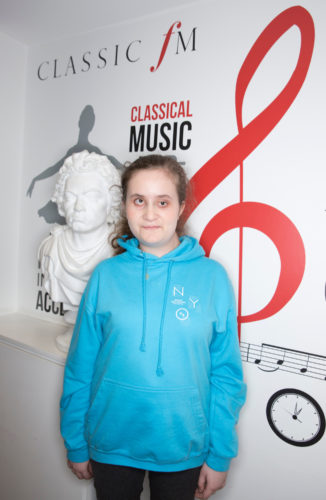 A night of strings and percussion curated by Biliana Voutchkova